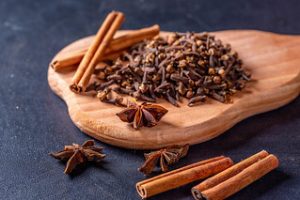 You can use cinnamon throughout the year but its sweet and spicy taste and warming nature is especially nice to chase the chill during these colder months.

This super-powered spice actually helps to balance your blood sugar, reduce inflammation and help fight infections. Cinnamon is rich in antioxidants that help reduce inflammation in the body making a cinnamon-spiced smoothie super for sipping after a hard workout or long day.

This super spice comes to the rescue to help decrease the risk of heart disease by reducing levels of LDL cholesterol and triglycerides and also lowering blood pressure. In addition to a happy heart, cinnamon can also boost brain health. Two compounds found in cinnamon appear to inhibit the buildup of the protein that is a hallmark of Alzheimer’s disease.

Try this elixir that pairs a winter favorite (apples!) with cinnamon and other superfoods. Make yourself a mug, curl up in a cozy blanket by the fire, and keep warm from the inside out.

Steep tea for 5-10 minutes.
In a small saucepan, gently simmer milk, cinnamon sticks (snapped in pieces), ground cinnamon, and maca (if using) for 5 minutes.
Remove cinnamon sticks and blend simmered cinnamon milk, chopped apple, apple cider vinegar, and collagen (if using) until smooth.
Add to brewed tea and sweeten to taste. Top with sliced apple and an additional cinnamon stick if desired.
This recipe serves one large mug or two small. You can decide if you’re willing to share it with a favorite friend or prefer to keep it all for yourself. (I won’t tell!)

If you do plan to experiment a bit more with cinnamon (which I hope you do), put it on your to-list to treat yourself to a new jar, especially if your cinnamon has been hidden in your pantry and gathering dust for more than a year. Most dried spices are best if you enjoy them within six months and cinnamon is the same. It should smell slightly sweet when you open the container. Your nose will know if it’s fresh and everyone in your house will come running when you heat it in a sweet or savory dish.

Cinnamon pairs nicely with a number of other spices! Consider allspice, cardamom, chili, cloves, coriander, cumin, ginger, nutmeg, anise, and turmeric. Where you use these, throw in a dash of cinnamon too!

This recipe is from Andrea Nakayama