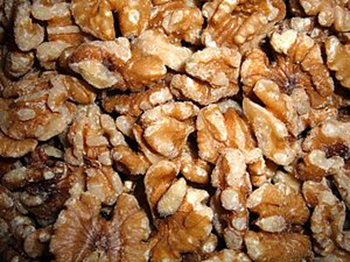 Eating walnuts on a regular basis slows the growth of breast cancer.

Walnuts slow cancer growth due to the presence of powerful plant chemicals which include omega 3 fatty acids, antioxidants, such as gamma tocopherol, a form of Vitamin E, melatonin and phytosterols. While all of these plant elements have anti-cancer activity, it is the synergistic presence of all of these nutrients together that makes walnuts such a potent cancer fighting food.

Researchers agree that walnut rich diets suppress the growth and development of breast tumors and suggest that adding walnuts to a healthy diet may reduce the risk of breast cancer as well as colorectal cancer, both of which are two of the most prevalent cancers in women.

While primary research was done on mice, not humans, it is interesting to note that not only did the mothers who ate diets high in walnuts have lower rates of breast cancer but the daughters who received the benefits of their mother’s diets while gestating and nursing and later consumed walnut rich diets themselves as they grew, also had lower rates of breast cancer.

Walnuts have been shown to actually turn dozens of  genes on and off in your cells.

The genes effected by a walnut rich diet influence the growth and development of the cells that line the breast ducts. This is where most breast cancers arise.

Studies showed how genes were expressed (active or inactive) in the breast tissue.   Many genes that suppress cancer were turned on, while genes that promote cancer were turned off. The walnut rich diet influenced genes involved in cell growth, cell death, cell development and differentiation in the mammary glands (milk producing cells in the breast).   This would be expected to alter the development of breast cancer.

Researchers are beginning to investigate whole foods rather than just components of foods.  This makes sense because we generally eat whole foods, not their components and because there seems to be an elegance in nature that gives us a synergistic blend of nutrients in whole foods. Walnuts can be found in in abundance in the Mediterranean Diet, one of the healthiest anti-cancer and heart protective diets in the world.

Walnuts are one of the few vegetarian and vegan sources of super anti-inflammatory Omega 3 Fatty Acids.  Studies have shown that walnut oil lowers two inflammation markers in your blood, CRP (C-Reactive Protein) and TNFalpha. Both of these markers are associated with cancer. Walnuts are therefore part of an anti-inflammation diet.

Many plant foods are rich in alpha-tocopherol, a common form of Vitamin E. Walnuts are unusual as they contain greater amounts of gamma tocopherol Vitamin E. Both forms have potent anti-oxidant cell protective effects, but gamma tocopherol is a more potent in its anti-cancer activity.

Walnuts also contain significant amounts of melatonin.  Melatonin is also produced in the human brain. Melatonin functions both as an powerful antioxidant but also in the regulation of normal sleep cycle. Normal sleep is crucial to robust immune function and resistance to infections and the development of cancer.

In Ancient China walnuts were recommended for nourishing the brain due to their resemblance to the brain itself.  While not very scientific, the Chinese traditional doctors turned out to be right with walnuts supplying essential brain nutrients such as omega 3 fatty acids, melatonin, magnesium, potassium and sodium, all crucial to normal nerve and brain function.

How many walnuts should you eat??? Nutritionist suggest 1-3 ounces per day. (10-30 walnut pieces)

Like all nuts, foods containing oils and fats can become rancid and are highly perishable. Therefore be sure to store nuts in closed containers away from heat and light to reduce oxidation. In warm climates, it is best to store nuts, seeds and oils in the refrigerator in glass jars to enhance shelf life.

Eating to beat breast cancer might include a healthy snack such as trail mix made of walnuts, dried cranberries and dried goji berries.

Sprinkle walnuts on top of  green salads and fruit salads and on top of cooked vegetables and whole grains. Enjoy walnuts with fresh yogurt.

Use walnuts in the fillings of fruit cobblers. Grind walnuts in a food processor and add to lentil and bean soups. Use in place of pine nuts when making pesto.

Use to make spreads combined with sun dried tomatoes, roasted garlic and a little olive oil or flax oil. Add to granola or oatmeal. Roast lightly and season with cinnamon or with savory spices such as cayenne, cumin and coriander as a snack. Add to poultry stuffing. Add to grain dishes such as rice pilaf, tabouli or couscous.