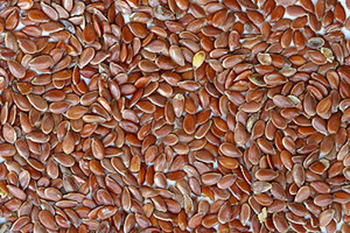 Postmenopausal women who consume diets rich in a plant chemicals called lignans have a lower risk of breast cancer.

A review of 21 studies from the German Cancer Research Center in Neherberg, Germany found that postmenopausal women with high lignan intakes in their diets were 14% less likely to develop breast cancer when compared to women who consumed diets low in lignans.

Other studies have shown that diets high in lignans also reduce risk of ovarian cancer and endometrial cancer (The endometrium is the lining of the uterus). So, we can see that a high lignan diet impacts the estrogen related cancers in women.

Lignans are a type of plant estrogen and a fat soluble antioxidant that is found in  high concentrations in flax seeds and sesame seeds and in smaller amounts in fruits, vegetables such as kale and broccoli, whole grains and legumes such as soybeans. Plant lignans are the principal source of phytoestrogens in the diets of people who do not typically consume soy foods.

Flaxseed is by far the richest dietary source of plant lignans, and lignan bioavailability can be improved by crushing or milling flaxseed. Lignans are not associated with the oil fraction of foods, so flaxseed oils do not typically provide lignans unless ground flaxseed has been added to the oil.

Although lignans are “plant estrogens”, they actually block the effects of a woman’s own more powerful estrogen, thus reducing overall estrogenic effects. And lignans also exert an anti-estrogenic effect, a protective effect on the breast, ovarian and uterine tissues while having a positive effect on bone density in women at risk for bone loss, osteoporosis and hip fracture.

Clearly, adding lignan rich foods to the diet on a regular basis will reduce the risk of the primary diseases that threaten women’s health.

When we include a variety of plant based superfoods we get more than one gift from each plant. That is the beauty in the design of nature.

How do you use flax seeds and sesame in your diet?  Do you have some special soy or kale dishes?