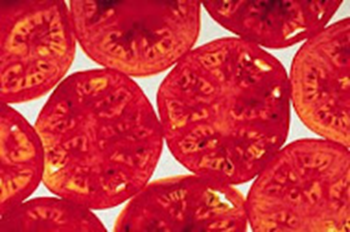 Tomatoes are lush, red and juicy and at their peak this time of year. Tomatoes get their red/orange color from the potent cancer fighting phytochemical, Lycopene.

Lycopene is a powerful cell protective antioxidant. It belongs to a large family of potent antioxidants found in foods and healing plants called carotenoids. Lycopene, like so many molecules from nature is a multitasker. It has has many effects on our cells and has more than one gift to give.

The most important of which may be that Lycopene may be able to turn cancer cell growth in another direction, OFF.

Cancer cells are missing an off switch and so they just keep growing and growing and proliferating. Normal healthy cells know when to call it quits, when their time is up, they wisely recycle themselves. This process is called apoptosis and this switch is called the apoplectic switch. Cancer cells have lost this STOP GROWING switch.

It just so happens that there are many phytochemicals, plant constituents, including Lycopene, that promote normal cell death, normal apoptosis, the red light, the STOP signal. And it appears that Lycopene may be able to turn on the brakes and thus effect this runaway cancer cell growth. In other words, stop cancer cells in their tracks.

Researchers at the Laboratory of Nutritional Biochemistry in Brazil* investigated
the potential anti-cancer activity of Lycopene, the major carotenoid component of tomatoes in several types of cancer cells in the lab. They concluded

By the way, the most common cancers today are breast, colon and prostate cancers! Tomatoes to the rescue! However, Lycopene has been most widely studied for its effects on prostate cancer cells.

…lycopene is bioavailable, accumulates in prostate tissue and is localized to the nucleus of prostate epithelial cells. In addition to antioxidant activity, in vitro experiments indicate other mechanisms of chemoprevention by lycopene including induction of apoptosis and anti-proliferation in cancer cells, anti-metastatic activity, and the up-regulation of the antioxidant response element leading to the synthesis of cytoprotective enzymes…

To translate all of that, lycopene can be absorbed and get inside your cells and even inside the nucleus where the DNA, your genetic material resides, where it turns genes on and off. It appears to induce normal cell death (apoptosis) and arrest growth and proliferation and even the spread of cancer cells to other locations (metastasis) and its antioxidant activity triggers the production of cell protective enzymes (as in protect and repair damage).

If that was a drug, I would want want to take it. But its not a drug. Its a gift from nature. And you can grow tomatoes in your back yard. Lycopene is a part of the great symphony and rainbow of colorful phytochemicals that keep us healthy when things go awry. If you eat a wide variety of colors in your fruits and vegetables, you get a daily dose of nature’s bounty of cell protective molecules. Your food is talking to your genes everyday. Send some healthy messages. And if you cook your tomatoes, it makes the lycopene more available.

We know that people who eat the Mediterranean Diet rich in lycopene experience lower rates of heart disease and cancers. So eat up! Tomatoes, red bell peppers, and watermelon are the perfect summer foods for getting your daily dose of lycopene. And you can also snack on dried goji berries or sun dried tomatoes the rest of the year!

Want to learn more from Dr.Nalini about Fighting Cancer in The Kitchen? Click Here!

This information and statements have not been evaluated by the Food and Drug Administration and are not intended to diagnose, treat, cure, or prevent any disease. Always consult with your health care provider before making any changes to your diet.