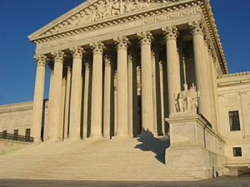 Angelina Jolie paid thousands of dollars to be tested for the BRCA1 and BRCA2 genes. Knowing that she carried a gene for an aggressive form of breast cancer that kills women was a crucial part of her decision making  process about her own health, her own life. Most women cannot afford these tests.

In a landmark decision the Supreme Court has unanimously decided that a private company cannot own genes or  a piece of nature and charge thousands of dollars for women to have access to lifesaving genetic testing for lethal aggressive breast cancers.  Here is one for the people, for women, for all of us. This case will set an important precedent when other companies try to own a gene and make money off of human suffering. Genes, the building blocks of life, a product of nature cannot be owned. Nature belongs to all of us.

All of the details of this case and the Supreme Court decision are clearly described in an excellent article by Mary Ellen Schneider of Oncology Practice. Schneider reports:

Private companies do not have the right to patent human genes, the U.S. Supreme Court has ruled. In a unanimous decision issued on June 13, the high court ruled that a naturally occurring DNA segment is a “product of nature” and is not eligible for a patent simply because it has been isolated.

The American Medical Association praised the Court’s decision.  According to Dr. Jeremy A. Lazarus, AMA president,

“Removing the patents on the building blocks of life ensures that scientific discovery and medical care based on insights into human DNA will remain freely accessible and widely disseminated, not hidden behind a vast thicket of exclusive rights,”

“Because of this ruling, patients will have greater access to genetic testing and scientists can engage in research on these genes without fear of being sued.

This is truly a landmark decision by the Supreme Court in favor of women and of all of us.  Potentially lives can be saved and disease processes more deeply understood as a result of this ruling.