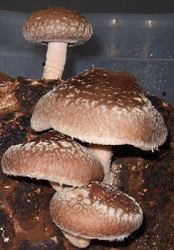 Shitake (Lentinula  edodes) is both a medicinal as well as very tasty edible mushroom with potent immune modulating properties of value to cancer patients and those who wish to avoid getting cancer in the first place. The polysaccharides found in Shitake mushroom stimulate the ability of white blood cells as well as T cells (important specialized cells of robust and normal immunity) to recognize and destroy foreign invaders that cause infections. In an experiment with cancer bearing mice there was also  a decrease the incidence of the formation of malignant tumors. Shitake mushrooms also increase levels of Interferon gamma another important factor in mobilizing immunity by increasing white blood cells.

Shitake is often found in traditional and modern herbal formulas given to cancer patients to promote longevity and vitality.  These formulas , often containing other polysaccharide  and beta glucan rich mushrooms such as Cordyceps, Corilous and Ganoderma all support normal immune function, promoting resistance to infections and cancer by stimulating the production of immune cells as well as fighting fatigue that accompanies cancer treatment.

Shitake is the Japanese word for  oak mushroom. These incredible mushrooms also known as black mushroom, black winter mushroom, black forest mushroom, Xiang Gu in Chinese and Pyogo in Korean. In the wild they grow on fallen chestnut and oak trees. They are available both fresh and dried. In Traditional Chinese Medicine Shitake mushrooms are used to strengthen and nourish the Vital Energy or Qi, being one of the great tonic herbs.

Shitake is very tasty and  is widely used in Asian cooking. It can be used fresh or dried in soups, stews, vegetable and meat dishes. There is a tradition of making medicinal soups that include therapeutic foods such as Shitake mushrooms to support the health and recovery as well as longevity. Try Asparagus with Shitake Mushrooms or Hot and Sour Immune Boosting Shitake Mushroom Soup.