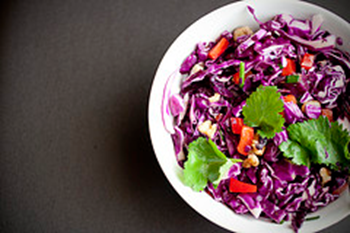 Watercress is rich in  beta-carotene and other carotenoids including lutein, calcium as well as trace amounts of omega-3’s. Watercress also contains a high amount of PEITC (phenylethylisothiocyanate) which has been shown to protect DNA from damage. Studies show that a regular intake of watercress has been associated with protection against colon cancer

Red cabbage  not only contains isothiocyanates but  also contains anthocyanins, a class of flavonids that provides as many as 36 different varieties of anticancer chemicals. Cabbage also contains a significant amount of glutamine, an amino acid that has anti-inflammatory properties. Red Cabbage boosts the immune system’s ability to produce more antibodies. Red cabbage contains large quantities of sulfur and other minerals that work as cleansing agents for the digestive system. Raw red cabbage cleans the bowels, thus helping to prevent indigestion and constipation. Raw Cabbage juice has been used historically to repair the stomach lining and heal ulcers.

Parsley has potent anti-inflammatory and anticancer abilities. The phytochemicals in parsley can slow the speed of cell division, leaving time for the cell to correct DNA mistakes or to activate apoptosis, and recent research shows that one particular compound found in parsley and celery, apigenin, can stop certain breast cancer tumor cells from multiplying and growing. Don’t leave that sprig of parsley on your plate. It is not just for decoration, it’s good for you!

Wash one large bunch  or 2 small bunches of  organic watercress and chop coarsely
Remove outer layers of red cabbage and slice thin (use about ¼ of a medium head for one bunch of watercress).

Toss salad with a pinch of salt, fresh pepper (if desired) and drizzle with balsamic vinegar and olive oil. Note:  use the best quality oil and vinegar you can find; most grocery store brands lack flavor and depth and are often derived from chemical processes. Add  ¼ cup chopped parsley.

Add cilantro in place of parsley.
For color you can add thinly sliced red or yellow bell pepper.
For an Asian flavor use toasted sesame oil and rice wine vinegar instead of olive oil and balsamic vinegar.
This recipe is adapted from Elyn Jacobs. You can visit Elyn at www.elynjacobs.wordpress.com

32 Things You Can Do To Control Cancer