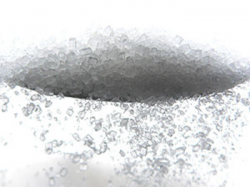 Starve cancer cells of sugar and they start to die. Sounds simple. You can do it a lab. But can you do it in your own body?

Studies on ketongenic diets  show that a high fat ketogenic diet that produces a low glycemic or low sugar environment in the will stress and starve cancer cells. Similarly, some research has shown that fasting a day before, the day of and a day or two after chemotherapy improves the effectiveness (kill rate) of the cancer treatment. Fasting similarly produces a physiologic state called ketosis and a shortage of sugars for fuel which stresses cancer cells and makes them more vulnerable to chemotherapy effects.

Here is an excerpt of an article that describes the UCLA Study:

Compared to normal cells, cancer cells have a prodigious appetite for glucose, the result of a shift in cell metabolism known as aerobic glycolysis or the “Warburg effect.” Researchers focusing on this effect as a possible target for cancer therapies have examined how biochemical signals present in cancer cells regulate the altered metabolic state.

Now, in a unique study, a UCLA research team led by Thomas Graeber, a professor of molecular and medical pharmacology, has investigated the reverse aspect: how the metabolism of glucose affects the biochemical signals present in cancer cells.

In research published June 26, 2012 in the journal Molecular Systems Biology, Graeber and his colleagues demonstrate that glucose starvation — that is, depriving cancer cells of glucose —activates a metabolic and signaling amplification loop that leads to cancer cell death as a result of the toxic accumulation of reactive oxygen species, the cell-damaging molecules and ions targeted by antioxidants like vitamin C.

The research, which involved UCLA scientists from the Crump Institute for Molecular Imaging, the Institute for Molecular Medicine, the California NanoSystems Institute, the Jonsson Comprehensive Cancer Center, the Eli and Edythe Broad Center of Regenerative Medicine and Stem Cell Research, and the Department of Pathology and Laboratory Medicine, demonstrates the power of systems biology in uncovering relationships between metabolism and signaling at the network level.

To explain the seemingly contradictory result that glucose deprivation reduced viability and at the same time increased signaling, the authors used an unbiased systems-biology approach that included phospho-tyrosine mass spectrometry and other biochemical profiling techniques.

Assessing the “crosstalk” between metabolism and signaling, they discovered that the glucose deprivation activates a positive feedback loop whereby the withdrawal of glucose induces increased levels of reactive oxygen species, which in turn inhibit negative regulators of tyrosine signaling. The resulting supra-physiological levels of tyrosine phosphorylation then generate additional reactive oxygen species.

“Because cancer cells live on the edge of what is metabolically feasible, this amplifying cycle of oxidative stress ultimately overwhelms and kills the cancer cell,” Graeber explained. “These findings illustrate the delicate balance that exists between metabolism and signaling in the maintenance of cancer cell homeostasis.”

In addition, the authors showed the possibility of exploiting this positive feedback loop for therapeutic intervention. Combining short-term glucose deprivation with an inhibitor of tyrosine phosphatases, they demonstrated synergistic cell death in a cancer cell line.

“Understanding the links between metabolism and signaling will empower new therapeutic approaches toward inducing this metabolic catastrophe,” Graham said.

The research team also included collaborators from the department of neurology and the human oncology and pathogenesis program at Memorial Sloan–Kettering Cancer Center and the department of pharmacology at Weill–Cornell Medical College.

The research was funded by the National Institutes of Health, UCLA’s Jonsson Comprehensive Cancer Center, and the California Institute of Technology–University of California, Los Angeles, Joint Center for Translational Medicine.

The California NanoSystems Institute is an integrated research facility located at UCLA and UC Santa Barbara. Its mission is to foster interdisciplinary collaborations in nanoscience and nanotechnology; to train a new generation of scientists, educators and technology leaders; to generate partnerships with industry; and to contribute to the economic development and the social well-being of California, the United States and the world. The CNSI was established in 2000 with $100 million from the state of California. The total amount of research funding in nanoscience and nanotechnology awarded to CNSI members has risen to over $900 million. UCLA CNSI members are drawn from UCLA’s College of Letters and Science, the David Geffen School of Medicine, the School of Dentistry, the School of Public Health and the Henry Samueli School of Engineering and Applied Science. They are engaged in measuring, modifying and manipulating atoms and molecules — the building blocks of our world. Their work is carried out in an integrated laboratory environment. This dynamic research setting has enhanced understanding of phenomena at the nanoscale and promises to produce important discoveries in health, energy, the environment and information technology.