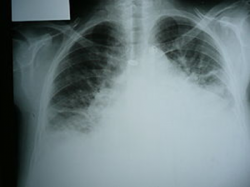 This is a very personal story.

We can argue that the use of new technologies have both positive and negative impact upon our lives.  Here is a my true story of  just how profound the use of technology can be. In this case an ipad and Skype saved the life of an old friend whom I had not seen in 30 years.

He has been living across the ocean on another continent, in Japan, for decades. We had lost touch.  And due to a twist of fate and the winds of karma, I was brought face to face with his medical emergency. It all unfolded right before my eyes over just a few days on the screen of my iPad.

Some months ago I was being interviewed for a tv series called “Where On Earth”. Over 13 episodes we explore why there are high rates of chronic illnesses such as breast cancer, prostate cancer, skin cancer, depression, obesity and Alzheimer’s disease in the North America and Western Europe while there are relatively low rates in places like China, Japan, Bhutan, Korea and India. Our team was going on location to film and to look for healing stories. I have many friends in these countries where I have spent a lot of time. Asia where I have spent a lot of time. I contacted  several people who might be a resource to the team while on location in Asia, including one person that I had not seen in almost 30 years. I knew he was living in Kyoto and thanks to the wonders of search engines, I found his email address on the internet and took the risk of reaching out and asking him if he might be open to helping our crew when they arrived in Japan. Not only was he happy to do so, but we had the opportunity to rekindle a long ago friendship and began to share emails as well as face to face Skype conversations.

It was apparent to me that my friend, now almost 70 years old, was not in good health. In fact, if I had run into him on the street, I don’t think I would have recognized him. He had not taken good care of his health through the years and had aged considerably. Over the course of a week, sharing by Skype, I could see that his body was swelling with fluid, his breathing was labored and his color went from rosy to pale. He was having trouble walking on his severely swollen legs and difficulty sleeping due to all the fluid in his lungs. I knew he was on a downhill slide. I knew he was in serious trouble. I discovered that he lives alone, with no family nearby up four flights of stairs that he could no longer navigate. Not only was he in denial, but his clarity of mind and judgement were also clouded by the physiologic brain changes that accompany this often fatal condition.

I was alarmed. Very very calmly I asked him if I might help him. He said, “Yes, I was hoping you would offer.” Thirty years ago when our paths diverged, I was  very young and not yet a skilled or seasoned physician. Now time had passed and I had practiced healing and medicine for over 30 years. I am a particularly good diagnostician and very good in emergencies. And so, I asked him a set of pointed diagnostic questions to assess what I already suspected was unfolding. His heart was failing as a pump. He was filling up with his own fluids. He was not getting enough oxygen.  He blood was clotting increasing risk for a stroke or heart attack or lung embolism which would cut off blood flow. He was experiencing life threatening congestive heart failure. A visit to the emergency room was in order. Now.

Very gently I told him that he should immediately go to the hospital. Contrary to my recommendation, he postponed his visit for 24 hours for irrational reasons. Upon arrival the doctors wanted to admit him immediately in order to stabilize his physiology which was about to fail and collapse.  I did not know if I would ever see him or talk to him again. The doctors went into high gear and embarked upon  an aggressive  and necessary course of life saving treatment to take the pressure off of his failing heart and kidneys and move the fluids out of his lungs, thin his clotting blood, reduce his blood pressure and attempt to get his heart to beat regularly and in a normal rhythm again so that he could get enough oxygen to his brain and not drown in his own fluids. Whether things could be turned around was unknown. He had waited too long.

This was an uncanny twist of fate, an unexpected opportunity, a miracle. After 30 years I  casually searched for his email  hoping to ask a favor of a long ago friend.  It is a marvel of synchronicity  that this tv project caused me to reach out and that we should reconnect at this crucial time in his life. And not only that, but I now had the medical skills and decades of experience to clearly recognize his potentially fatal condition as it unfolded before my eyes, thanks to Skype. Had we been simply sharing by phone or email rather than Skype, I would not have seen the progression of his decline in front of me.  He may have died before getting to a doctor. Congestive heart failure can turn fatal very suddenly and very quickly.

Some months have passed and although his heart is damaged and is a weaker pump for getting blood and oxygen to his brain and his body, he has now been somewhat stabilized and is not teetering on a precipice. I made additional natural medicine recommendations in service to his health. With the additional support of a therapeutic heart healthy diet, herbal and nutraceutical supplements, acupuncture, tai chi and rest along with weight loss, more normal sleep and the necessary care of his cardiologist, he has cheated death and now has more time to be around for his daughters and granddaughter. Yes, his doctors are managing his disease with lifesaving pharmaceuticals without which he may not be alive. And he also has an integrative care plan for health and healing. The best of both worlds, combining modern medicine with ancient healing wisdom.

I would say, that Skype and an ipad were responsible for saving his life.

Pretty amazing!  Big Exhale! Thank you for the iPad Steve Jobs and whomever invented Skype!