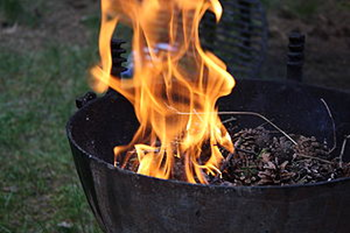 Is your Barbecue Turning Your Healthy Food into Toxic Cancer Causing Poisons?

Grilled food just might increase your cancer risk. It’s summer and the barbecue is all fired up. You can smell it from your neighbors backyard and you are salivating. Don’t jump over the fence quite so fast. Think before you eat! The longer meat is cooked, the more dangerous it becomes.

Consider this: You are serving cancer causing food from the grill.

The blackened areas on charred and grilled flesh foods (meat, poultry, fish) are a source of carcinogenic chemicals.  These chemical directly damage DNA, our genetic material, initiate mutations that can lead to the development of cancer.

When the proteins are heated to the point that the flesh starts to brown and blacken, you have the presence of heterocyclic amines, (HCA) which are known carcinogens. HCAs form when extreme heat causes a chemical reaction between the amino acids natural found in proteins and creatine found in muscle meats. HCAs are also found broiled and well done red meats.  Other high temperature cooking such as frying also produces these dangerous chemicals.

Diets with high exposures to HCAs are correlated with higher rates of cancers of the pancreas, colon and digestive tract.   Learn how to reduce risk of colon cancer NATURALLY.

HCAs can directly damage your DNA initiating cancer. The highest levels of HCAs are found in grilled poultry, steaks, salmon grilled with the skin, well done hamburgers and  barbecued pork such as spare ribs.

And when the fat drips onto the coals and there is a flare Polycyclic Aromatic Hydrocarbons (PAHs) , another family of carcinogens are formed. The smoke carries these hydrocarbons which coat the food we eat. PAHs also form with charring. Exposure to PAHs are correlated with increased rates of stomach cancer.

What to do to keep your family safe?

The safest thing to do is to give up grilling, frying, cooking at high temperatures, overcooked and well done meats

Try Grilling Vegetables and Fruits which do NOT form cancer causing chemicals when cooked at high heats.

These statements have not been evaluated by the FDA and are not intended to diagnose, treat, cure or prevent any disease.