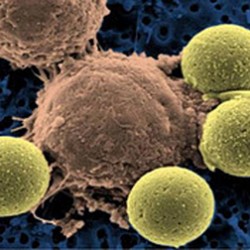 Vitamin D3 (Cholecalciferol)  allows our immune natural killer cells to be able to fight off serious infections as well as cancer. Multiple studies show that Vitamin D is crucial to activating our immune defenses. Without adequate levels of Vitamin we will not be able to activate the killer cells in our immune system. The Canadian Government Health system recommends Vitamin D supplementation during cold and flu system to boost resistance to infections.

Vitamin D is produced as a natural byproduct of the skin’s exposure to sunlight.  However most of us do not get enough sun exposure to produce sufficient levels of Vitamin D to keep the immune system activated. Sources of Vitamin D include  fish liver oil (cod liver oil), eggs and fatty fish such as salmon, herring and mackerel or taken as a dietary supplement as Vitamin D3 (cholecalciferol). No definitive studies have been carried out for the optimal daily dosage of vitamin D but as a large proportion of the population have very low concentrations of vitamin D in the blood. Many studies suggest that optimal blood levels of Vitamin D3 are between 55-80 ng/ml. This usually requires oral supplementation in most people. Discuss the appropriate dose with your health care provider.

According to Professor Carsten Geisler from the Department of International Health, Immunology and Microbiology, Copenhagen, Denmark, explains that “when a T cell is exposed to a foreign pathogen, it extends a signaling device or ‘antenna’ known as a vitamin D receptor, with which it searches for vitamin D. This means that the T cell must have vitamin D or activation of the cell will cease. If the T cells cannot find enough vitamin D in the blood, they won’t even begin to mobilize.”

According to Vitamin D expert Cedric F. Garland of University of California San Diego and colleagues also found women who had 47 ng/ml of vitamin D in the form of 25-hydroxyvitamin D [25(OH)D] were 50 percent less likely to have breast cancer.

According to David Liu, Ph.D. Early studies have suggested that high levels of serum vitamin D may reduce breast cancer risk by up to 70 percent.

Some researchers believe the link between vitamin D sufficiency and a decreased risk in cancer is promising. A randomized controlled trial found a 77% reduction in all-cancer incidence when the study group supplemented with 1100 IU/day of vitamin D plus 1450 mg/day calcium. Says Dr. Grant, “Based on various studies of UVB, vitamin D and cancer to date, it appears that global cancer burden can be reduced by 15-25% if everyone had vitamin D blood levels above 40 ng/ml.”

You may also like:
Free Report: Three Dangerous Cancer Myths Revealed | What Your Doctor Is Not Telling You
Vitamin D |  Are Your Levels Dangerously Low?
Top 10 Reasons You Should Be Tested for Vitamin D
Low Vitamin D Levels Linked to Aggressive Breast Cancer