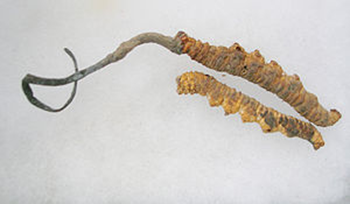 Cordyceps sinensis (CS), a traditional Chinese Medicine is a fungus that has been historically used for over 2,000 years throughout China and Asia as part of treatment for a variety of conditions including many cancers.

In modern times the effects of Cordyceps on immune modulation and its use in concert with modern chemotherapy agents, both to enhance therapeutic benefit and to manage side effects have been widely studied.  Cordycepin, one of the active constituents,  has been shown to possess many pharmacological activities including immunological stimulation, and anti-bacterial, anti-viral, anti-oxidant anti-inflammatory and anti-tumor effects. It may be of benefit to support cancer patients and cancer survivors.

Available evidence suggests that the efficacy of CS as a potential anti-neoplastic/anti cancer therapeutic agent is related to a role as an activator of innate immune responses.

Cordyceps, like many other medicinal mushrooms has been traditionally cooked into soups in Asia for its nutritive and tonic properties. Like other medicinal mushrooms CS is rich in polysaccharides, the primary immune modulators as well as being rich in vitamins and minerals.  It can be thought of as a medicinal food. Cordyceps is best taken as either a water extract (tea or soup) or a high quality powder can be mixed into juice or water, or even into yogurt or applesauce.

It is important to get high quality, properly prepared and processed Cordyceps product to insure that you will get the most benefit from this healing mushroom. As with any other product of this nature, seek the guidance of a health care professional.

The constituents in medicinal mushrooms such as CS have few drug interactions and can often be used safely along with conventional therapies. Always discuss the use of herbal medicines with your doctor.

What are the potential benefits of Cordyceps sinensis?

Studies show the following actions and effects of the water extract of Cordyceps sinensis: (CS):

These statements have not been evaluated by the FDA.  These products are not intended to diagnose, treat, cure, or prevent any disease. Always consult your doctor before using any supplement or herb.