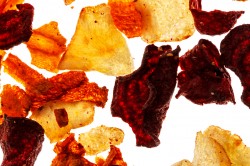 Beet pigments are  rich in healing plant chemicals called  betanins and  betalains which have a positive effect on inflammation and also enhances the vitally important Phase Two detoxification function in the liver, allowing you to process and get rid of toxic chemicals and properly detoxify your own hormones, including estrogen. That is why beet juice is part of so many healthy detox plans. You will also find betalains in the stems of red chard and red rhubarb. Cancer cells exposed to beets in the lab demonstrate lower levels of pro-inflammatory molecules including COX-1 and COX-2.  Cancer both thrives in and produces inflammation, so controlling inflammation is crucial.  Betalains also appear to slow down the growth of tumor cells in the lab.  The effects of beet pigments have been studied for their effects on cells from breast cancer, lung cancer, colon cancer and stomach cancer cells.

Rosemary  not only adds flavor  and enhances digestion but also contains cancer fighting carnosol.  According to the National Cancer Institute  carnosol is “a promising anti-cancer, anti-inflammatory agent….and has been studied in breast cancer, colon cancer, prostate cancer and skin cancer. ”

Cover the beets with rice vinegar

Bring to a boil, immediately turn off the heat, allow to steep for 15 minutes and drain thoroughly

Bake for 15-20 minutes until crisp and just slightly brown

Sprinkle with sea salt and rosemary

Use both red beets and golden beets.  Be sure to cook them separately so you get both deep purple and bright orange chips

Try this same recipe with finely sliced carrots or yams