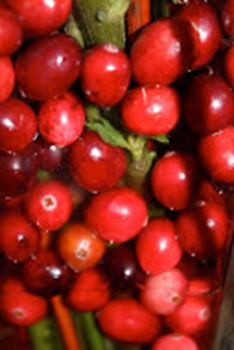 Cranberries are one of the great Superfoods rich in plant antoxidants and cancer fighting phytochemicals called proanthocyanadins (PACs).

Cranberry phytochemicals protect your genetic material, your DNA from damage by high oxidative stress and free radical damage. This is one mechanism by which plant antioxidants inhibit cancer development and progression. As we age, we have more oxidative stress and therefore benefit by adding deeply colored foods rich in antioxidants to our daily diet. The deep red color of cranberries alerts us to the presence of plant chemicals that protect and support repair of your DNA. Your food is talking to your genes. Choose wisely! (4), (11), (13)

PACs have a unique ability to cross link or attach to the lining of the bladder and urinary tract thus inhibiting the attachment and growth of bacteria, including E. Coli, a common cause of urinary tract infections. This explains why cranberry juice has been used for hundreds of years in traditional medicine to promote resolution of and even reduce the frequency of bladder infections. (8), (9). (10)

Similarly some stomach ulcers are related to the overgrowth of the bacteria Heliobacter pylori. PACs act similarly in the stomach lining by preventing the attachment of this bacteria and thus lowering the chances for its growth which leads to symptoms such as burning and pain and ultimately ulceration of the stomach lining. (1), (5)

Cranberries, like many plant foods are multi-taskers and act by interacting with more than one aspect of cell physiology and cancer growth factors. Cranberries are also source of epicatechins, quercitin and ursolic acid, all of which are potent cancer fighting agents. The wide array of plant chemicals in cranberries regulate the activity of several enzymes crucial to cancer cell growth. These enzymes include matrix metalloproteinase, quinone reductase and ornithine decarboxylase. Cranberry phytochemicals also promote normal cell cycling and normal cell death (apoptosis) which is lost in cancer cells, allowing them to grow and multiply without limit. By supporting normal cell functioning, the factors contributing to the development and growth of cancer are decreased. Studies have demonstrated that plant chemicals present in cranberries are active in several cancer cell lines, including hormonal cancers such as breast cancer and prostate cancer as well as very common cancers including lung cancer and colon cancer. This may be due to the presence of small amounts of resveratrol and pterostilbene which protect DNA and thus prolong longevity of healthy cells. (4), (6), (7), (11)

The deep red color of cranberries signals to us the presence of the cancer fighting quercitin (also found in the skin of red apples and in red onions). Cranberry has been show to lower the production of several pro-inflammatory molecules including cyclooxygenases (COX 1 and COX 2) as well as Interleukin 6 (IL-6) which are all upregulated in cancer cells and the surrounding tissue. (14) (13) Altering the environment of cancer cells with food and diet is a potent strategy.

Adding Cranberries to Your Diett You will derive the most nutritional value from fresh, raw unprocessed berries. Many of the antioxidant and cell protective properties are preserved when cranberries are dried or cooked into delicious sauces. Consider keeping dried cranberries on hand to add to salads, grains, yoghurt, applesauce, hot tea, even chicken or meat dishes. They have a delicate and tart flavor that does not overpower. You can create a cancer fighting cell protective diet by getting in the habit of adding nutrient dense foods such as berries rich in phytochemicals on a daily basis.

Because the phytochemicals in cranberries address primary aspects of cancer development and progression including inflammation, oxidative stress and free radical damage, detoxification, cell cycling and cell death as well as gene expresson and DNA damage and repair they must be considered one of the great cancer fighting foods.

These statements have not been evaluated by the Food and Drug Administration and are not intended to diagnose, treat, cure or prevent any disease. Always consult your professional health care provider for guidance with your health, medical and dietary decisions.