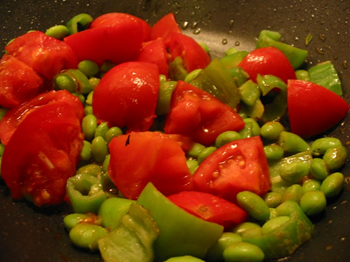 There is a major pro-inflammatory gene lurking inside the center of every cell. When this gene gets turned on the stage is set for the development of cancer. You can turn it off with food.

NFkB (Nuclear Factor Kappa B) is a gene that mediates major inflammatory processes inside each and every cell in your body. When this gene is turned high levels of inflammatory molecules are produced. These inflammatory molecules produce many all too familiar symptoms such as fatigue, achiness, depression, sleep changes and nerve and muscle pain. These are  symptoms that signal the presence of  inflammatory illness. That may include a common cold, the cellular environment that promotes cancer or the actual presence of cancer.

Cancer itself is an inflammatory disease.Managing the cellular environment and modulating inflammation can reduce cancer related symptoms and change a pro-cancer terrain to an anti-cancer terrain within your body. The ongoing presence of inflammation sets the stage for many diseases, including cancer. Lowering inflammation with plant chemicals found in common foods, herbs and spices may contribute to  turning off genes and inflammatory molecules that lead to the development, growth and spread of cancer cells. Stop inflammation. Stop Cancer.

It is well known that cancer itself, and the side effects of cancer treatments increase inflammation. The presence of inflammatory molecules called cytokines, (especially IL-6, IL-10 and IL-1B and Tumor Necrosis Factor alpha) is at the root of the most common symptoms.

Fatigue is a primary and common complaint of cancer patients and can an early warning sign for the presence of disease. Fatigue typically worsens as  disease progresses. Fatigue can is also a common cancer treatment side effect of cancer treatments which promote inflammation such as chemotherapy, radiation and surgery.

Cancer survivors can experience ongoing long term symptoms for months or years. Most typically cancer survivors complain of fatigue, pain and aching long after the completion of treatment.  Much of this discomfort is associated with inflammation. We also know that higher levels of inflammation lower breast cancer survival.

Inflammation promotes cancer. Nature has provided us with potent plant chemicals that can turn off pro-inflammatory Nuclear Factor Kappa b. That means your food can turn off cancer promoting genes. What you eat and drink has a direct impact on modulating inflammation at the genetic level. It is like turning off your water main.There is not going to be any water coming out of any faucet because the source has been cut off. By turning off NFkB, we turn off one of the main genes, one of the most powerful sources of a cascade of inflammation promotes cancer and cancer related symptoms that impact quality of life. Put a stop to that right now. Add these five foods to your diet now.

Five foods, herbs and spices that can turn off the source of inflammation and help you fight cancer.

TUMERICCurcumin, a plant chemical, a polyphenol, from Tumeric. Tumeric, which gives curries its bright yellow color is a traditional herbal medicine and spice used for centuries throughout Asia. By lowering inflammatory potential, curucumin has been shown to modulate fatigue, nerve pain and changes in mood, memory and thinking function. Curcumin also interrupts the normal progression of cancer cells and is found in most traditional anti-cancer herbal formulas. One study showed that the use of curcumin was associated with a decrease the levels of inflammatory TNFa and resulted in maintenance of normal body weight and preservation of muscle.
SOYGenistein, is an isoflavone plant chemical found in soy beans.  Genistein has the potential to modulate inflammation by stopping the activation of the NFkB and the presence of IL1B and IL 6  molecules in your cells.  As the levels of these inflammatory molecules declines with genistein use, symptoms such as loss of appetite, nerve pain, weight loss recede.
RED AND PURPLE GRAPESReseveratroll has demonstrated amelioration of nerve pain, muscle wasting and weight loss by modulation of inflammatory molecules. Reseveratrol reduces the activity of NFKB and decreases production and levels of inflammatory TNFA. Resveratrol is also known increase cellular longevity by to impacting SIRT-1 gene that effects the protective telomere tails on our DNA. Long telomeres equals long life.
TOMATOES Lycopene is a red carotenoid found in tomatoes, watermelons, red papayas, pink grapefruit and red carrots. Even thought there is no red color, asparagus is another food high in lycopene. Lycopene not only modulates inflammation through the NFKB pathway, but also acts as a potent antioxidant.
GREEN TEA Green Tea is the source of potent antioxidant plant polyphenols including cell protectant ECGC Epigallocatechin gallate. ECGC has also demonstrated anti-tumor activity as well as modulation of fatigue, mental clarity, thinking and memory. ECGC has been shown to decrease levels of inflammatory TNFa, IL-1B and NFkB.